By Julia Billyard1 May 2021No Comments 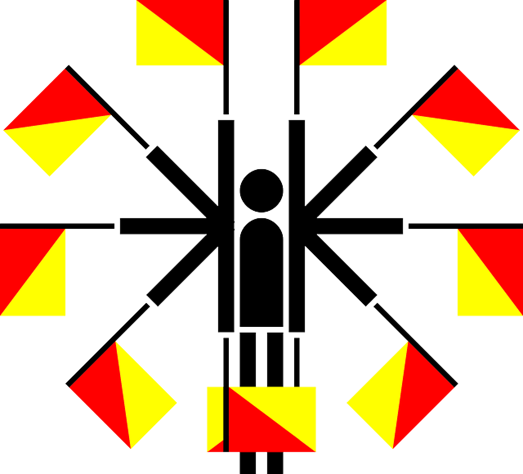 You may not have heard of a semaphore before, but it is most often recognised in fields where technicians and workers communicate with flags (such as in the navy).

Now, you might be wondering, how can this type of system make its way into games, puzzles and escape rooms?

Well here’s a surprise: It’s not limited to flags!

Everything from smoke signals to blinking lights qualify as a semaphore as long you are using them to send a coded message. And unlike other ciphers, a semaphore is not necessarily limited to just using the letters of an alphabet. What may seem like a three-letter set of signals may actually be three sentences!

The biggest obstacle to solving a semaphore challenge is actually realising there is one. This is because they can take in so many forms before you even start to figure out what message it is hiding.

It can be in the form of a peculiar light that seems to be blinking at intervals in one corner of the room. It can be a set of statues that are holding objects similar to flags. In all cases, a semaphore is a cipher that can easily hide in plain sight!

Challengers must pay close attention to all the objects in the room, especially when there doesn’t seem to be anything that indicates a hidden message being written down somewhere. Don’t forget that you still also have to consider the meaning of the semaphore’s message once they spot it!

Much like symbol-based ciphers, the context of a semaphore challenge can direct players to better deciphering it.

For example, it is always safe to assume that blinking lights could be Morse code first. And if that doesn’t work, then there might be a clue in the room that’s related to interpreting signals from lights (like a manual conspicuously placed on a table or a note taken from a cell that you were in previously).

Another helpful thing to keep in mind is that many well-designed mystery games and escape rooms generally weave the semaphore into the story. For example, your clues could take in the form of journal notes left by a former prisoner in your escape room’s story and they may talk about something like a flag semaphore with its own corresponding phrases being used in some part of the facility.

A semaphore system could even require you to create a message yourself. (Imagine a room mechanism that splits your group in two and your only recourse is to communicate answers using smoke signals.)

For both puzzle solvers and puzzle makers alike, semaphore systems of any kind, make for incredibly fun challenges involving clever uses of props as well as storytelling. And unlike text or symbol-based ciphers, they can be a lot harder to pick up simply by virtue of their design.

On the other hand, cracking this type of code can be a real test of your observation and pattern detection skills. Aalong with a bit of stock knowledge on the side. Always be prepared to think of other ways a message can be sent without having to write it down!