By Julia Billyard7 January 2020No Comments 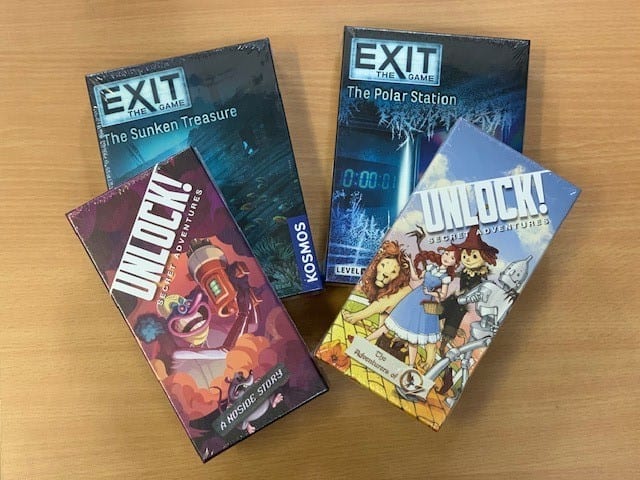 Sometimes there are people in your life who really prefer staying indoors and use up too much energy going out (let alone join you for a fun, escape room escapade). Still, there’s no doubt that these friends of yours love games, love challenges and love adventure as long as they’re not forced to move around so much.

Board games are often the go-to holiday present for buddies like these. However, as we showed in one of our past blogs, there are also specific board games that perfectly capture the feel of an escape room adventure and make for fitting gifts that come from enthusiasts. Here are two of the most popular:

This was the one we directly mentioned in a past post. But for your convenience, here is a quick overview of how this board game series recreates the escape room feel and is great for indoor parties.

The game is mainly a stack of cards, with one card representing the room and several more representing the objects you will be interacting with in search of clues. The cards all have a corresponding number on their backs and will interface with each other based on those numbers (which we’ll explain in just a bit).

The game also requires you to have a mobile app, which is readily available on both the Google Play Store and the App Store. It is through the app that you will be able to recreate other escape room mechanics such as timers, hints and mechanisms that involve typing in number combinations or passwords.

Of course the cards themselves also do an incredibly designed job of bringing to life every player’s interaction with the clues. For example, each card has a puzzle piece icon that can be matched with that of another card. And when you add up the numbers of the two cards together, that actually leads to a third card that may represent the result of what you did (for instance, combining one card with a key and another with a lock box leads to the card showing the lockbox now opened).

These mechanics are just the tip of the iceberg though! The Unlock! series will have players faced with all sorts of fun challenges unique to various genres (from a cartoon adventure to thwart a mad scientist to a perilous foray into an uncharted island). And unlike most escape room-style board games, these can be played over and over again. If you want to gift a friend the equivalent of a lifetime pass for escape rooms, then Unlock! Is that gift!

Of course, if there’s not a lot of room in your budget, then Exit is also a pretty good gift and is one of the most affordable escape room board games on the market.

The beauty of Exit is in the cleverness and complexity of its puzzles. In fact, the mechanisms in the various games of the series are arguably even more dynamic than Unlock! Hence, it is difficult to describe in words.

What is notable about it is that every aspect of each game’s rules and components does an incredible job emulating the experience of taking your friends for an escape room adventure. You even start by signing up your names on the ruleset sheet that comes in the box!

Now, the other two core components of the game are a puzzle wheel (to simulate certain puzzles in the ruleset) and a deck of cards (which interact in the same manner as those in Unlock!). Some of the cards also serve as additional hints, clues and even represent the pathways your group will travel on as you try to escape.

There are also components in each Exit game that make them very unique to each other. The Secret Lab, for example, has a notebook of sorts that you will need to write on to further understand the clues you get from performing experiments.

Exit does have one setback, however. As implied by the notebook example, many of each game’s components will require cutting, taping and writing. That means each experience is really a one-time run.

Then again, it’s a good thing that these games still gives great value because they are so cheap. If you want to give a friend just a good yet light taste of what escape room challenges are like, then Exit is a great way to introduce them to the experience.

Overall, whichever of these you decide to get, they are definitely worth the money either way. Being unable to head out no longer has to serve as a constant obstacle to your escape room plans. Give these two escape room games a try at your next Christmas party and bring the experience to life on tabletop!

Elude Escape Room in Galston sell both of these in their foyer or online at eludegames.com.au