Cipher of the Month – Combination Ciphers

By Julia Billyard18 February 2021No Comments 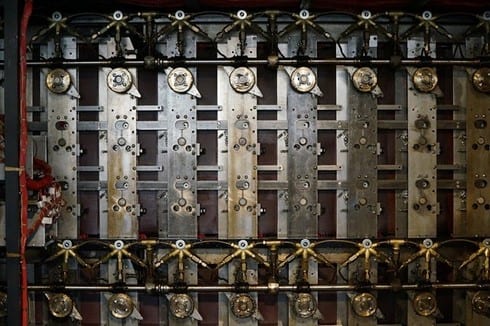 For code makers and puzzle designers, sometimes it is not enough to use a single cipher. This isn’t even because today’s technologies can easily spot what kind of cipher is being used at any given time. It is also because many individual ciphers are so well-known and recognisable that even the average escape room player can instantly identify them. (You can certainly thank the internet for that!)

There is no doubt this has led many designers to consider bolder, more complicated and ambitious systems of code making. Today, it may not even be enough to use fancy symbol-based codes (which are really just letter-substitution ciphers with homemade glyphs).

That is why the most challenging puzzles in escape rooms and games are often combination ciphers.

A Complex Chain of Systems

Combination ciphers are essentially what a code maker has to resort to short of becoming a cybersecurity engineer. It takes all the well-known ciphers that have existed and combines them into a sort of chain that a codebreaker must try to follow through in order to see the real message.

For example, you could start out with a pigpen cipher but its resulting letters still don’t make sense unless you further put them through a book cipher. And in an escape room challenge, that certainly sets up players to really think harder and be more observant about the connections between clues.

While on the side of the puzzle designers, it really challenges them to broaden the way they want to build the entire experience. What mechanisms can be used to have one cipher transition into the other? What form will the clues take? What kind of hint could be dropped without giving the whole thing away too early in the challenge?

Without a doubt, you will need to have a considerable stock knowledge of individual ciphers to quickly overcome a combination of them. However, another important skill to have is being quick to act.

A common mistake is to find one clue to the combination (say, a key book for the first part) but then delay because you think the deciphered message doesn’t make sense. Oftentimes teams would assume they didn’t follow the cipher right and try again.

The more effective thing to do is immediately have someone look around for additional clues. It so happens that the strength of combination ciphers is also their weakness. Knowing that you still have more ciphers to uncover means less time wasted working on what is really just one piece of the whole puzzle.

A True Test of Observation

On a final note, with escape rooms becoming ever more exciting and challenging with each passing year, players should always be prepared to see growing varieties of combination ciphers.

This will really require you to pay more attention to every room and for a longer period of time. It is no longer safe to assume that once you have found one clue, you can just set it aside after its corresponding code has been broken.

Be prepared to see each and every important item to have some connection with the next phase of the escape room challenge. Combining ciphers opens so many possibilities and the same applies to discovering their solution!